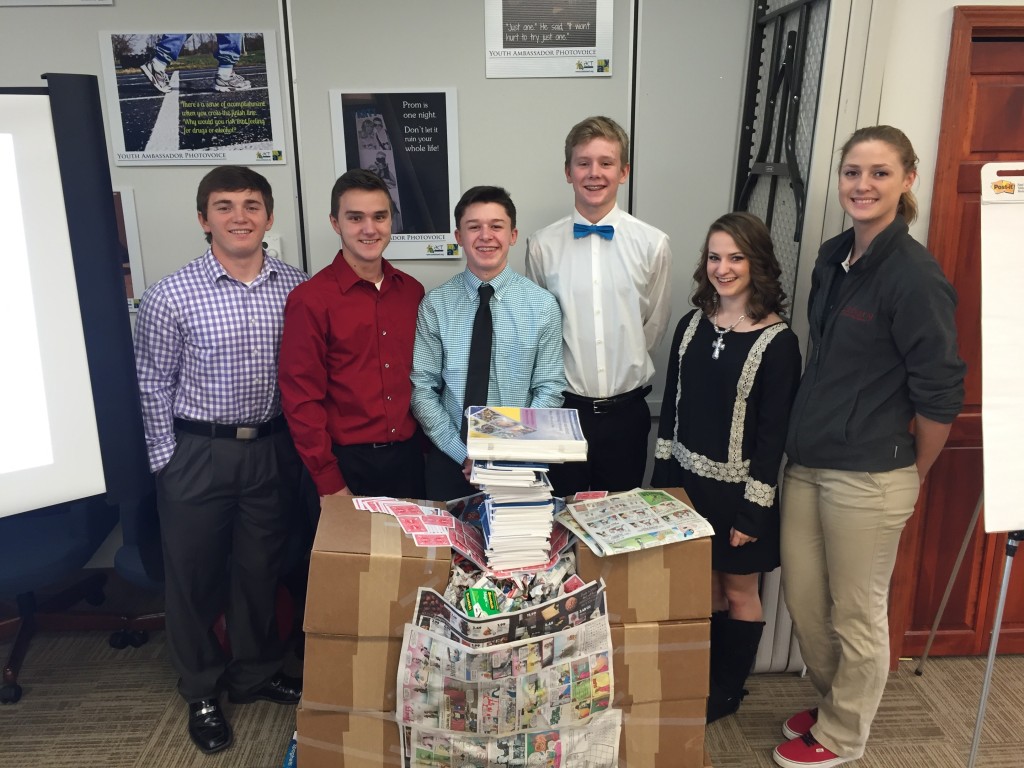 The Youth Ambassadors meet once a month to discuss current problems in their areas and help achieve their mission to end substance abuse in their communities and Missouri.  Regular trainings and activities are scheduled with the discussions to enhance participation and understanding of subject matter. 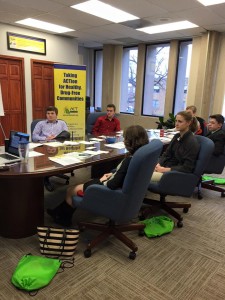 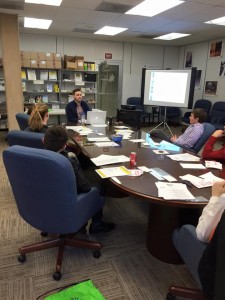 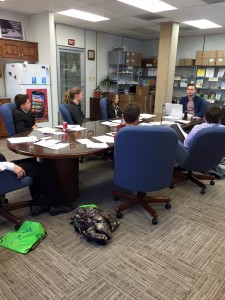 The Youth Ambassadors met for their first training on January 7, 2016.  This dedicated group of six completed six exercises: 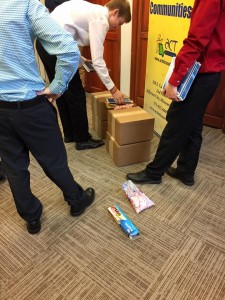 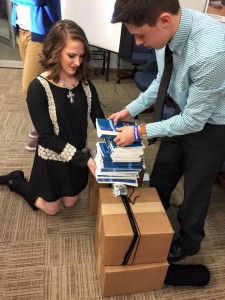 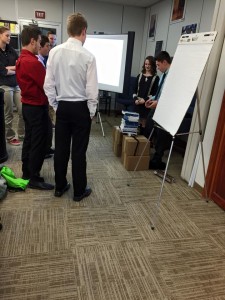 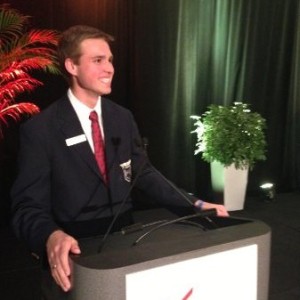 Chris Dzurick has been involved with the Missouri Youth Adult Alliance (MYAA) and ACT Missouri since his sophomore year of high school, when he reached out to the organization to help serve a need at his local school. He worked with the organization, attending Speak Hard as a workshop presenter and sharing resources with his school and community. Chris continued his substance abuse prevention work when he joined the staff of the Boys & Girls Club of Cape Girardeau, working with their SMARTMoves and MethSMART drug prevention curriculum. Chris is currently employed with the Missouri Department of Elementary and Secondary Education as the State Adviser for Missouri Future Business Leaders of America – Phi Beta Lambda. His passion for working with the future leaders is ingrained in his soul, and he hopes to make a difference in the outlook on America’s future.

Chris will lead a team of high school students in their efforts to promote substance abuse prevention within their schools, communities, and Missouri. He will provide leadership training, key data facts, and guidance at several events, including Prevention Day at the Missouri Capitol and the Speak Hard Youth Rally.

The Community Partnership of the Ozarks has helped organize a group of Springfield high school students called 417SQUAD (Students Questioning Using and Abusing Drugs) who want to make a difference in their world.

This group formed as a prevention coalition in the 2013-2014 school year and they meet monthly as a team of 12-15 students, discussing issues that their peers face in an attempt to provide solutions in various ways, such as advocating for positive alternative activities and sharing information pertinent to their age group.

In addition to providing prevention strategies to their peers, 417SQUAD provides representation on the Community Partnership’s Fighting Back Coalition, which consists of leadership from all of the Greene County prevention coalitions. They provide a valuable voice in providing a youth’s perspective on prevention strategies relevant to their peers. They are also able to share ideas and receive support from the community for their efforts.

During this school year, the 417SQUAD learned that 1 in 3 teens experience dating abuse, including physical, emotional, verbal or sexual abuse/manipulation, and that 67% of teens never tell anyone about the abuse. The team became passionate about sharing this information because they felt that if more people realized how prevalent the issue was, they could help make it less taboo to discuss the topic and/or seek help.

Taking action, they partnered with the Violence Free Families Coalition (VFF) to help promote an awareness campaign about this issue. VFF had already placed ads to educate teens on the topic at the Battlefield Mall, a local hotspot for adolescents to hang out with friends.

To add to the campaign, the teens scripted, filmed, and edited a public service announcement (PSA) depicting a scene of teen dating abuse and offering resources for help, which will air on school TVs and various websites. They also applied for and received grant funding to purchase movie theater ads, which will air during this summer’s major blockbuster movies that teens will most likely go to see. To spark conversation, the teens also developed a hashtag (#MakeItStop417) to use on social media to spread awareness about the campaign website (makeitstop417.org).

Prior to this teen dating abuse campaign, a member of the 417SQUAD was featured in a suicide prevention PSA campaign throughout Springfield and the surrounding area. 417SQUAD members also helped develop the campaign and its message, which mainly targeted youth and urged individuals to talk to someone they know who may be struggling with suicidal thoughts, as this has shown to reduce the likelihood of a suicide attempt.  There have been many people impacted by this campaign and at least one life saved when a local teen, after seeing the PSA, talked to a friend who was thinking about suicide.

To further educate themselves, 417SQUAD traveled to Jefferson City in March to attend the ACT Missouri Speak Hard conference. This conference is intended solely for youth from across the state to gather and learn about drug and violence prevention strategies as well as to network with their peers in Missouri. Six high school students from Springfield attended the conference and reported that they learned a great deal of information and are excited to implement new ideas here in Springfield!

417SQUAD will continue to meet throughout the summer to develop more prevention strategies for next year!

It’s time for this month’s #SubstanceFreeSaturday! Each month we try to give you ideas on what to do to celebrate, but we would also love to hear your ideas! Let us know on Facebook, or email us at info@actmissouri.org.

Spring is in full swing, so now is the perfect time to get outdoors and do something fun with your friends. Go for a bike ride, take a walk, or have a picnic in the park.  What is your favorite outdoors activity?

Belton Cares’ After Prom Party is an event held the evening of prom from midnight to 4 -5 am at a local gathering spot, Aaron’s Family Fun Center. The goal of the After Prom Party is to offer an alternative place to go, so teens can gather and enjoy the evening while staying safe and sober. Juniors and seniors, along with their dates, are welcome to attend. The event provides plenty of entertainment with music and a dance area, snacks and soft drinks, goody bags, and lots of other fun activities such as sand volleyball and miniature golf!

Belton Cares has been providing this event for almost 15 years. Each year, approximately 200 juniors and seniors attend out of 995 students. The school provides support by promoting the event in the school announcements and through other high school media, as well as selling tickets in the cafeteria. The after-prom party has also gained community support. Community businesses, civic groups and parents donate prizes, cash and time. The event space costs $2,500 and event prizes are around $1,000. These costs are paid by donations and fundraisers.

Students also have a part to play in how their prom evening will turn out. SADD offers some great safety tips to help keep the night fun and healthy:

For more information from SADD about planning a safe prom, check out: http://www.sadd.org/promplan.htm

In the fight against underage drinking, adding caffeine to the mix only complicates the matter even further.

Research is demonstrating that drinking caffeine in high amounts quickly primes the brain toward future binge drinking of alcohol2.  Greater consumption of caffeinated energy drinks in teens and pre-teens is linked to earlier initiation of alcohol drinking, to greater amounts of alcohol drinking, and to a higher propensity toward sensation seeking, risky behavior, and future alcoholism3.

Kara Bernskoetter, MYAA Youth Ambassador and member of the MYAA Marketing Committee, provides us with a first-hand account of her experience at this year’s Prevention Day at the Capitol.

Prevention Day was held at the capitol on January 28th. The day began with us, the MYAA Youth Ambassadors, providing breakfast pastries to the General Assembly and their staff along with the visitors. This was a great opportunity to spread the word about MYAA and what we are and do. There was a display set up of photo voice posters created by us Youth Ambassadors. Photo voice is a way to communicate the message of prevention through pictures and captions. I visited my state senator, Mike Kehoe, and put my advocacy training into action. Talking to your legislator is a great way to prove that the youth have a strong voice and that we truly do care about the decisions made in our communities.

MYAA’s Youth Ambassadors are the main catalyst’s for the prevention in underage drinking MYAA continually strives to achieve.  MYAA Ambassadors are hardworking, motivated students, who dedicate their time and their commitment to reaching out to their peers, their friends and others about the dangers of underage drinking and the benefits of abstaining.  Youth Ambassadors are role models to younger students and enjoy the confidence of believing in the fun and the empowerment of healthy choices and how important it is to support yourself.

If you know of a young person who would be great for the Youth Ambassador Program, or you are a young person who wants to get involved, the applications are open now, and close on May 4, 2015. Check out the Youth Ambassador website (https://www.actmissouri.org/youth-ambassadors/) for more information and to access the application when it becomes available.

Here are three of MYAA’s Youth Ambassadors and a little information about them.

With all the excitement from the 2015 #SpeakHard Youth Conference, we almost forgot about this month’s #SubstanceFreeSaturday! Luckily, the dates are all printed on our #RedRibbonWeek calendar!

This month is a great time to get friends together and watch some March Madness basketball! Is your team still in the tournament?

Even if you don’t like basketball, you can still get a group of friends together and do something fun and #SubstanceFree! Make some yummy snacks, watch a movie, or play a game. Saturdays are a great time to hang out with your friends without the stress of homework!

We are so excited that it is almost time for Speak Hard 2015! Almost a year of planning goes into this event, so it is always great for us to see how much fun the youth have, and how much they learn throughout the day. In order to secure a location and a keynote speaker for Speak Hard, we start planning months in advance.  Unfortunately, this means that we select the date for Speak Hard before the legislative calendar has been set.  For the past eleven years, Speak Hard has been during the same week and not conflicted with the legislature’s Spring Break.  This year, we were not that lucky and the legislature’s Spring Break has been moved and will take place during Speak Hard.  While I know that some groups look forward to legislative visits as a bonus to Speak Hard, there is still so much to look forward to at this year’s conference!

This year’s keynote, M&P Presentations, is an awesome team that brings high energy and will get the prevention inspiration started early in the day. We’ve also changed the schedule so that every participant will see the keynote and an additional four sessions.  That is two additional sessions from last year!  There is a ton of fun and education planned for the 11th Annual Speak Hard Youth Conference.  Youth will have the opportunity to gain knowledge that they can utilize when advocating in their local communities.

Thank you for your flexibility! We hope to see you all at the 11th Annual Speak Hard Youth Conference so that we can learn together and teach youth the importance of Substance Abuse Prevention!

For more information, and to register, visit the Speak Hard page.