In the 2018 Missouri Student Survey, more than 1 in 10 youth (14.1%) surveyed reported that they considered suicide in the last year and 10.9% made a plan to attempt suicide. Of those who attempted suicide, 22% had attempts that resulted in injury. The majority of those who attempted did so only once. 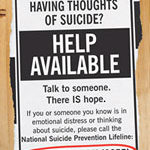 Suicide prevention training is now required for most educators and public health agencies.  The Division of Behavioral Health’s Website has a comprehensive collection of suicide prevention resources, fact sheets, trainings, ways to get involved, and funding opportunities.

Suicide in Missouri: Where We Stand

Prevention of Suicide in the U.S.