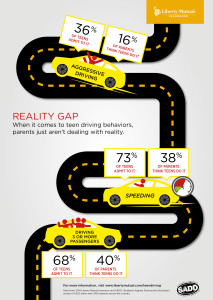 BOSTON (December 1, 2015) While so much rightful attention has been paid to the dangers of distracted driving in recent years, a new study released by Liberty Mutual Insurance and SADD (Students Against Destructive Decisions) reveals that teens are still neglecting the most basic rules of the road – from observing speed limits and wearing seatbelts to engaging in aggressive driving behaviors – and parents are largely unaware. With fewer hours of daylight, winter road conditions and busy holiday traffic, it’s critical that parents discuss getting back to the basics with their teen drivers – not only during winter months, but all year round.

Despite a majority of teens (81 percent) who consider aggressive driving to be dangerous, more than one-third (36 percent) admit to having an aggressive driving style, revealing a disconnect between teens’ understanding of safe driving and reality. Even more alarming, 31 percent of teens say they have retaliated or experienced road rage when provoked by another driver – creating a dangerous environment for everyone on the road.

According to NHTSA, aggressive driving is defined as an individual committing a combination of moving traffic offenses, such as driving above the speed limit and cutting off other drivers; while retaliatory driving, also known as “road rage,” is defined as an assault with a motor vehicle, which is a criminal offense. The new data shows these behaviors go largely unnoticed by teens’ parents – with only 16 percent reporting their teens drive aggressively and 13 percent thinking their teens have retaliated when provoked – showing the need for a reality check among parents about their teens’ hazardous driving habits.

“Aggressive driving behaviors such as speeding, following too closely or cutting off other drivers can be dangerous for all drivers but especially problematic for teen drivers given their relative inexperience,” said Dr. William Horrey, Ph. D., principal research scientist at the Liberty Mutual Research Institute for Safety. “The study revealed some significant gaps in what teens and parents think is safe versus teens’ actual behaviors reinforcing the critical need to refocus on the basics along with other safe driving habits before it’s too late.”

Getting Back to the Basics

With winter and holiday driving conditions in full swing, ignoring the basic rules of the road can be dangerous. In addition to aggressive driving styles, the new survey reveals teens are not only neglecting the driving basics, but are also failing to observe the law. For example, one in five (18 percent) teens admit to not wearing a seat belt. Also alarming, while the majority (89 percent) of teens may consider themselves “safe drivers,” 71 percent of these “safe drivers” admit to speeding.

However, this is news to parents. While the majority of teens may disclose their speeding habits, less than half (38 percent) of parents actually believe their teens speed. In addition, teens who have driven for one-plus years are more likely to speed (47 percent) than those who have had their license for less than six months (28 percent) – showing that more experience behind the wheel does not prevent reckless driving behaviors.

Of those same self-described “safe drivers,” two-thirds (67 percent) admit to transporting three or more teen passengers in the car, and only 26 percent of all teens perceive this to be distracting.  According to NHTSA, the risk of a fatal crash goes up in direct relation to the number of teens in the car; and therefore it’s important for teens to understand the ramifications and dangers of driving with multiple passengers. Just as concerning, parents are also largely unaware of this behavior, with only 40 percent reporting that their teens drive with three or more passengers in the car.

“What may seem insignificant to teen drivers, like having friends in the car or driving a few miles over the speed limit, can have a major impact on their safety and endanger others on the road,” said Stephen Gray Wallace senior advisor for policy, research and education at SADD. “We challenge parents and teens alike to revisit the importance of following the basic safety rules of the road. Ignoring driving fundamentals is simply not worth the risk.”
Start Conversations to Keep Teens Safe
Parents and teens must recognize the dangerous implications of forgetting the basics of road safety – not just the use of technology and social media – to reduce these risks on the road. The report also showed that only 9 percent of teens have formal family driving rules. It’s essential for parents and teens to have open and honest conversations and set expectations around responsible driving.  That’s why Liberty Mutual Insurance and SADD encourage parents and teens to consider signing a Parent-Teen Driving Contract. The contract is both a conversation-starter about safety issues and a customized agreement that provides both parents and teens an easy roadmap to uphold family driving rules and encourage open communication leading to safer behavior behind the wheel. Whether teens are planning to get a permit or are already on the road, this guide demonstrates a commitment to safe and responsible driving. The signed agreement can help earn mutual trust to give better peace of mind. To download a contract, visit www.LibertyMutual.com/TeenDriving.

About the Study
Liberty Mutual Insurance and SADD commissioned ORC International to conduct a qualitative and quantitative methodology to measure teen driving attitudes and behaviors. The study was initiated with a series of focus groups held in Chicago, Ill. and Washington, D.C. from October 28 – October 29, 2014, followed by a survey among 1,622 eleventh and twelfth graders from across the country. Overall the findings from the study can be interpreted at a 95 percent confidence interval with an error margin of +/- 2.23 percent. Error margins for subsets such as licensed drivers will be wider. Additionally, the study surveyed 1,000 parents of high school aged teenage drivers, providing an overall error margin of +/- 2.94 percent.

About SADD
SADD, the nation’s leading peer-to-peer youth education, prevention, and activism organization, is committed to empowering young people to lead initiatives in their schools and communities. Founded in 1981, SADD today has thousands of chapters in middle schools, high schools and colleges. SADD highlights prevention of many destructive behaviors and attitudes that are harmful to young people, including underage drinking, other drug use, risky and impaired driving, and teen violence and suicide.  To become a Friend of SADD or for more information, visit sadd.org, parentteenmatters.org or follow SADD on Facebook, Twitter and YouTube.

In business since 1912, and headquartered in Boston, Mass., today Liberty Mutual is a diversified insurer with operations in 30 countries and economies around the world. The company is the third largest property and casualty insurer in the U.S. based on 2013 direct premium written as reported by the National Association of Insurance Commissioners. Liberty Mutual also is ranked 78th on the Fortune 100 list of largest corporations in the U.S. based on 2014 revenue. The company employs over 50,000 people in more than 900 offices throughout the world.