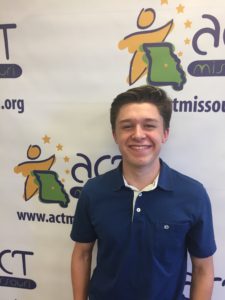 Gunner is active in athletics through wrestling and golf.  He also participates in Quiz Bowl and Future Teachers of America, as well as serving on the Student Relations Board as a liaison between students, faculty, and the school board.

Gunner shares his passion for prevention in the short essay below:

The Mississippi River
By: Gunner Smith

An anonymous individual once said, “Destroy what destroys you.” Drug prevention is important to me and my community because I want to destroy what has destroyed me and so many other people. Drugs have destroyed lives, relationships, and so much more; therefore, it is up to the future generation to destroy the use of drugs. A world without drugs would be a happier world which is why I have decided to take part in this war against drugs. Every person that uses their words to speak out against the use of drugs and alcohol has picked up their lethal weapon and are ready to destroy what has destroyed them.

I picked up my weapon as soon as I could learn what drugs were. Before I was born, my Grandfather died of lung cancer. My parents once explained tobacco products to me while driving over the Mississippi River. They told me that drugs and tobacco products are somewhat like the Mississippi River’s current. The very best swimmers might not make it across that river if they chose to dive in, and it can become very difficult to rescue the folks that are caught in the river’s current. I have took these words very seriously all of my life.  Many high school students seem to make these types of mistakes young in their lives, unaware that the past helps to shape the future.

With these words of advice, I went on to speak about drug, alcohol, and tobacco awareness at a very young age.  In fifth grade, the D.A.R.E program educated me on the harms of these poisons, and that’s when I started to write my feelings down on paper using my parents’ advice.  My essay won out of my entire grade. As I read my paper on the stage of my high school’s auditorium, I became happy that my words and feelings were good enough to read before people.  In that essay, I also wrote about a promise to never be drowned by a current, and I have kept that promise today.  This situation in fifth grade caused me to eventually join Smokebusters freshman year and Making Your Mark sophomore year to help my community out even more. As a Junior, I became a Missouri Youth Adult Alliance Ambassador. I received the opportunity to speak with legislators and use my lethal weapon to destroy what continues to destroy me.

I have so much appreciation for MYAA because it has brought me to discover seven other people that stand strong against a current. Together, MYAA is an infantry that seeks to destroy drugs, tobacco, and alcohol. We are equipped with lethal weaponry every time we speak, yet we ride on a life saving boat that seeks to help everyone that has been nearly destroyed.