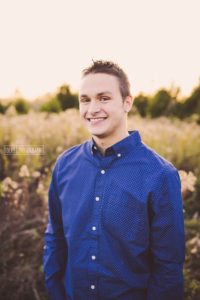 Colby is a senior at Buffalo High School. He has been involved with the Tobacco Free Missouri Youth (TFMY) activities for the past two school years, and he is a current member of the Tobacco Free Missouri Youth Team. As a part of his TFMY activities Colby was involved in the filming of a video PSA, #servedsmokefree, that aired on KSPR 33 May 9-29, 2016. He was involved in the Clear MO Air Training in October 2016 and will be a part of the Kick Butts Day Rally at the Capitol in March 2017. Colby is also composing a new video PSA and story board to air on KSPR 33 in the spring of 2017. He will also be part of a group that will present to local city government about the absence of a city tobacco policy and his school board about the lack of enforcement of the school’s comprehensive tobacco free policy. Colby was a founding and faithful member of the newly formed coalition, Dallas County Live Well Alliance. The coalition meets bi-monthly, and Colby has been attending meetings for the past two school years. As a part of the coalition Colby was involved in designing educational materials for the Marijuana Prevention Grant the coalition received in last spring and rgw official logo for the Dallas County Live Well Alliance. Colby has also been involved in composing and presenting letters to local business leaders and community members to increase membership of the Dallas County Live Well Alliance.