Numerous communities around the state took advantage of National Prescription Drug Take Back Day on April 29th. The DEA sponsored Take Back events provide an excellent opportunity to bring together community partners and law enforcement, educate the public about the scope of prescription drug misuse, and most importantly, get dangerous medications out of the hands of our vulnerable youth.
According to the National Institute on Drug Abuse,
“Prescription drug misuse has become a large public health problem, because misuse can lead to addiction, and even overdose deaths. For teens, it is a growing problem:

In Missouri, 10% of students have misused a prescription drug in the past 30 days. Nearly 30% report that they are “very easy” or “sort of easy” to obtain, and 31% state that they got the drugs from a family or friend; 13% of whom did so without permission. Another reason to prevent prescription drug misuse, especially opioid pain killers, is its connection to heroin addiction; in fact, nearly 80% of heroin users started with prescription opioids.
One very effective medication misuse prevention strategy is to reduce access, and the DEA sponsored Take Back events are a perfect vehicle to collect unused medications and dispose of them in an environmentally friendly manner.
The DEA’s St. Louis Division includes Illinois, Iowa, Kansas, Missouri, Nebraska, and South Dakota. In the past eleven take backs since October of 2011, MO has disposed of 669,250 pounds of medication; 48% of the total collected in the six-state region! In the most recent event on April 29th, MO turned over 36,948 pounds of medication to the DEA for disposal.
Missouri’s Prevention Resource Centers provided some highlights of the events their service areas hosted. In the north-central region, the Linn County C2000 Coalition collected ten pounds, and the neighboring city of Trenton added an additional 15 pounds. 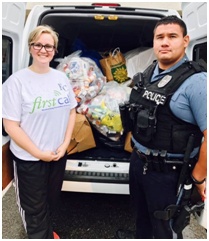 In the Kansas City area, First Call collected multiple bags of unused drugs to turn into the DEA for disposal.

In Platte, Ray, and Clay counties, all twelve of their Permanent Prescription Drug Drop Boxes participated in the event, and the most rural area in the Tri-County Mental Health region collected almost 700 pounds in a six-month time frame.
Boone County offered 8 locations for disposal; four within the city limits of Columbia, and four in the surrounding towns of Ashland, Centralia, Hallsville, and Sturgeon. Jefferson City’s Police Department accepted unwanted medications in their lobby.

In the Springfield area, six pharmacies hosted events, and despite torrential downpours, they collected a total of 1,727 pounds; their third largest amount to date!

In the Southeast, the Perryville Police Department collected 35 pounds. The Cape Girardeau County Sheriff’s Office and the Jackson Police Department also hosted Take Backs. Excessive rain and flooding caused two cities in the region to cancel their events.
The SEMO Behavioral Health region hosted three events and collaborated with the Bernie Police Department and Chamber of Commerce. The Dexter and Poplar Bluff Police Departments turned over 160 and 174 pounds respectively to the DEA for safe disposal. 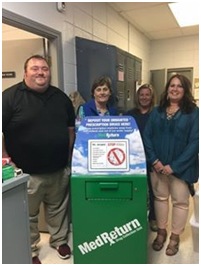 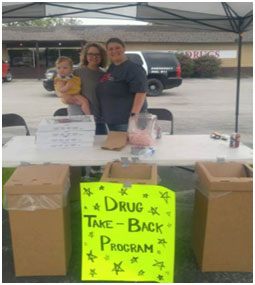 One of the latest Missouri communities to place a Permanent Prescription Drug Box was in the Bootheel region in East Prairie, and despite only being open for two days, the community got the word out and collected a substantial amount of prescription drugs.

These are just a few of the highlights from around the state. If your community hosted an event, please share it with us on Social Media! If you are interested in hosting a Take Back in your community, contact ACT Missouri.