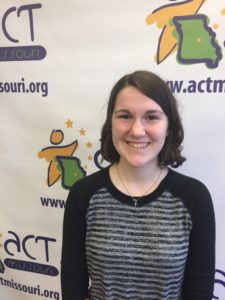 Abigail spends time volunteering in her community with her church, the Salvation Army, Behind the Badge, and Hawthorn Bank.  She has been an Honor Roll student every year, and been accepted to Missouri Girls State.

From a young age, Abigail was always taught to “just say no” to drugs and alcohol. She has learned this from school, her parents, and also through Council for Drug Free Youth. Abigail has always believed that doing drugs and drinking alcohol was not the right thing to do, but some of her peers do not agree with her.

When Abigail was in the fifth grade, her class was educated about the dangers of drugs and alcohol through the D.A.R.E. program. When she was in the ninth grade, she was able to help educate sixth graders through U.P.L.I.F.T. Thinking back to her excitement as a D.A.R.E. student and also the excitement of the kids she taught to learn how to “just say no,” Abigail believes that instilling the facts that drugs and alcohol can have a negative impact on your life in these kids is the most important thing.

Abigail believes that it is better to teach the kids about the dangers of drugs and alcohol when they are younger and more willing to learn. Not only will they be more excited, but they have a greater probability of using that knowledge later in life. Most high school kids will ignore what they are being taught because they either know what is going to be said, or they don’t care. If high school kids are doing recreational drug or alcohol use, then they aren’t going to change their ways because an adult says it is dangerous. That’s why she believes it is better to focus on the younger children, especially since they are the next generation that will guide the future of our societies.